Recent advances in RNA/DNA sequencing and genome-wide microarray technologies have revealed that transcription is widespread throughout the eukaryotic genomes, generating a large number of non-coding RNAs (ncRNAs). NcRNAs are defined as RNAs with no significant protein-coding capacity. Expression of ncRNAs is in some cases regulated developmentally and tissue-specifically. We are analyzing biological roles of ncRNAs in a wide range of cellular reactions, such as pre-mRNA splicing, nuclear structure formation, chromatin remodeling and genome stability, using fission yeast and cultured mammalian cells. NcRNAs can be categorized into two groups; short ncRNA, such as miRNAs and piRNAs, typically 20-200 bases in length, and long ncRNAs (lncRNA), such as satellite lncRNAs, ranging from ~200 bases to 100 kb in length. We have recently revealed that satellite lncRNAs transcribed from the centromere regions have essential roles in chromosome segregation, and suggested that these lncRNAs are promising targets for anti-cancer drugs. A new paradigm of “ncRNA regulation” is now emerging. 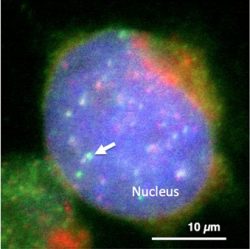